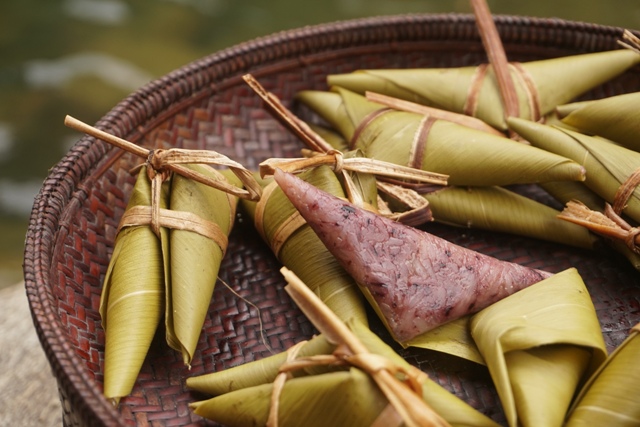 I’ve known Sâm and some other Pa Cô friends, residing along Anôr spring in A Lưới (Thừa Thiên Huế Province, Việt Nam), for more than 10 years. I have been trying so many dishes that they treated me such as grilled pork in bamboo tubes, shredded fish, steamed wild vegetables, and even braised tadpoles from Anôr spring but, strangely enough, I hadn’t tasted any A Quát until Sâm introduced it to me when I visited her family a few weeks ago.

A Quát dumplings, for the Pa Cô and Tà Ôi, are not simply food but sacred offerings to their ancestors. These dumplings are only made for some special occasions such as weddings, harvest festivals, funerals, reburial rituals, and so on. The A Quát makers must inform their ancestors about their plan of cooking A Quát one day in advance. The A Quát dumplings have such a significant and sacred role in the ritual life of the Pa Cô and Tà Ôi so it’s not a surprise to know that they have some taboos. Those people or their family members who are builders, wood-choppers, wedding-goers, or funeral-goers, etc. are not allowed to make A Quát according to the Pa Cô and Tà Ôi’s tradition.

A Quát dumplings are made of a single ingredient and with no spices so they are quite plain. They taste best when paired with grilled pork, shredded fish, or a ground mixture of sea salt and fresh hot chili, etc. With their tiny and portable size, they are great takeaways.

It’s hard not to be charmed by A Quát dumplings’ simplicity and beautiful shape. They look like meticulously-wrapped gifts that someone would prepare for their loved ones on a special occasion. These dumplings also win my heart because of their environmental friendliness. They are wrapped in leaves and tied with banana midrib.