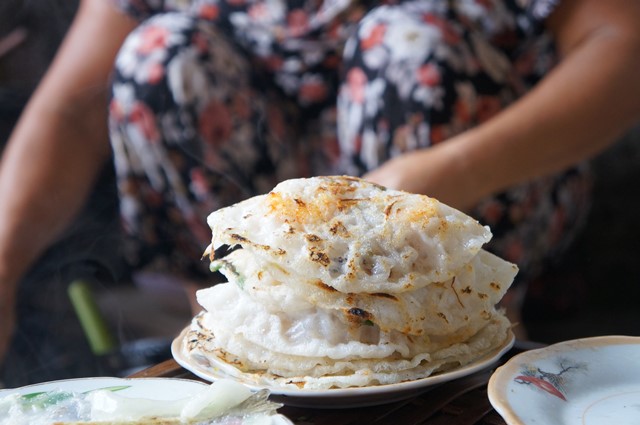 Right at a corner of chaotic Chuồn Market, there is a woman, surrounded with people, struggling with a dozen of pans. It’s O Lành (Auntie Lành), a great “bánh khoái cá kình” maker. She used a short stalk of a banana leaf coating the pan’s bottom with a thin layer of cooking oil. She then put in one or two small fresh fishes, known as “cá kình” to the local people, and put the pan on the stove. After that she poured the liquid rice paste in and covered it with a pan lid. A few minutes later, it was ready to serve hot.

“Bánh khoái cá kình” is not an all-season dish like the well-known “bánh khoái” filled with shrimp, pork and vegetables; it is only available during the season of “cá kình” which is harvested from Chuồn Lagoon around the 4th month and 7th month according to Lunar Calendar. This simple yet mouth-watering dish may be found in other regions; however, Chuồn Village is especially famous for this dish. It’s so popular that people start to assume that Chuồn Village is the birth place of it. Perhaps it’s true. Who knows?

My friend Bích believes that eating “bánh khoái cá kình” with hands is nicer. I tried and I loved it as I could feel the heat and the tenderness of the meat.

How to get there: Chuồn Market locates at Chuồn Village (aka An Truyền Village), Phú An Commune, Phú Vang District, Thừa Thiên Huế Province. It’s about 10km to the South-East of Huế City’s center. Take Phạm Văn Đồng Str. and go straight ahead until you see a crossroad where there is a sign of Hue Star School. Turn right and keep going. When you meet another crossroad, turn left into An Truyền Village, and Chuồn Market is about 10-minute drive from there.