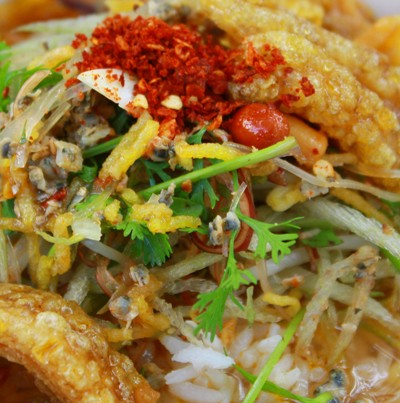 At last, I find her on a sunny Sunday morning. She is sitting behind her gánh hàng(*) on the pavement of Mai Thúc Loan Str. surrounded by people having cơm hến (rice with clam) and bún hến(**) (noodles with clam) – two of the most popular Huế specialties.

A friend of my friend happened to tell me about a special cơm hến seller a few months ago and since then I always intended to have her cơm hến if I had a chance to come to Mai Thúc Loan Str. That guy told me that she was a weird old woman but her cơm hến was the best in Huế. He said she was ugly and very tanned, and that she never got married, and that she rarely smiled. Although her cơm hến/bún hến was very delicious and she made a good business out of it, she and her gánh hàng only appeared on Mai Thúc Loan Str. occasionally.

Therefore, I think I’m lucky when going to Mai Thúc Loan Str. on the morning that she is in the mood for selling. I recognize her right away. Yes, she isn’t very good-looking and her skin looks weather-beaten. And there is no smile on her wrinkled face but I notice that she has sad and beautiful eyes hidden under the large conical hat. She is about in her sixties.

Her gánh hàng is opposite Tân Đức Tailor’s (156 Mai Thúc Loan Str.) and Uncle Hồ’s house (158 Mai Thúc Loan Str.). People come and go but there are still people waiting for their turn to be served. Her hands’ movement is fast and with rhythm. I stare at her hands serving food, and find out that she is wearing three gold rings – two plain rings on her left ring-finger and the other with a precious stone on the right middle finger; and that her way of serving cơm hến (and maybe making too) is different from others’ that I have known.

A normal way of serving cơm hến is to put the mixed veggies in a bowl, and then add steamed rice, spices, stir-fried clam and lastly pour the clam broth in. She does it differently. She puts the mixed veggies in a bowl, then adds some spies and then pours a little bit clam broth in. She then mixes the mixture before adding the steamed rice. Finally, she tops it with stir-fried clam, spices (again) and fried pork skin.

Her bún hến is so-so but her cơm hến is especially tasty and different. It’s the flavor of cơm hến that I feel familiar and new at the same time. I’m enjoying the cơm hến and observing her. She is like a well-known culinary performer, and her gánh hàng is the stage while the diners are a crowded audience. Sometimes I see one or two smiles on her gloomy face, which adds more passion to my experience with her food and herself.

Her customers do not talk much and neither does she. Sometimes they make some small talks but the atmosphere is like the one you can find among friends or family. The seller seems to know everybody of them as she calls them by name.

While waiting for my second helping, I discover that Việt is her name. It’s a Vietnamese name which is usually favorable for men. I’m thinking about this sad-eye woman’s manly name when a man comes and sits down on the low plastic chair next to me. He greets O Việt (Madam Việt) with a half-teasing, half-blaming tone: “You should have given a “nghỉ bán” (not selling) announcement in advance if you hadn’t come. I came here to have cơm hến for a couple of times, and every time I left with an empty stomach…” O Việt’s is only a gánh hàng, neither a restaurant nor a stall, nor a shelter so her customers don’t call “open” or “close” but “sell/appear” or “not sell/not appear” to describe her state of business.

O Việt replies: “I was here yesterday.” She smiles shyly.

I’m about to leave when a young woman comes and before she orders her food she gently blames O Việt: “You have taken a long break from selling, huh O Việt?”

O Việt replies, using the same sentence: “I was here yesterday.” However, people can never foresee when her next appearing will be.

The young girl and O Việt start to make some joke about her business. I don’t hear the whole joke because I have paid the bill and am ready to go and because I am deep in thought. I am wondering how such a weird person like O Việt is so awaited. She naturally becomes a important part of some cơm hến lovers’ day, and creates such a friendly and intimate cơm hến community.

(*) Gánh hàng is a pair of goods containers that the Vietnamese sellers carry with the support of a pole. The sellers can shoulder the pole with the containers/baskets at the two ends, and travel from this place to the other.
(**) Bún hến is another variant of cơm hến.