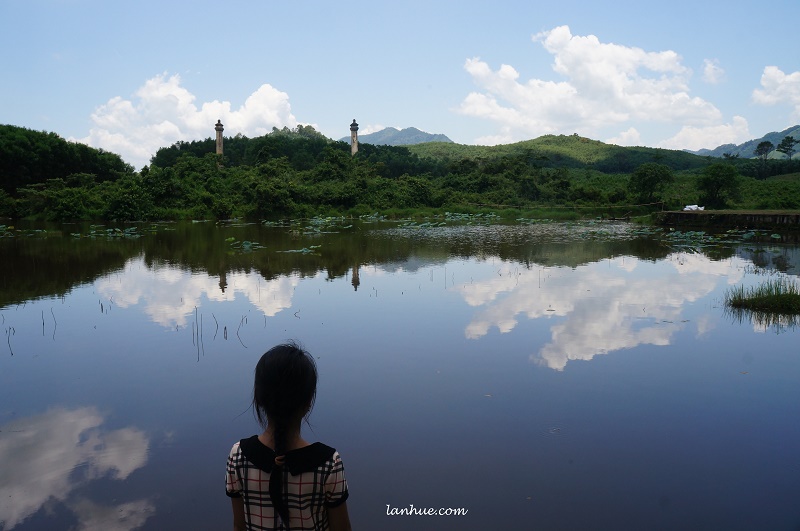 When I was a pupil at Kim Long Primary School, every year, on public holidays, the school would organize some outdoor activities. One of them was a picnic to the imperial tombs in the suburb of Huế so that the pupils could learn about history and enjoyed some good time in the nature as most of the tombs were built in pine tree woods or surrounded with gardens and lakes.

For a little girl like me, a trip, which was about 10 km or a little bit further away from home or school, was already considered a long journey. I recalled most of my classmates, girls or boys, having car sick and I was no exception back then (luckily I am no longer now). By the time we reached the historic sites, we all looked like stale fish, so pale and smelly. Fortunately, it wouldn’t last long before we ran around the historic site and discovered the place by ourselves but within our teachers’ radar.

Our teachers then were very patient and listened to all of our questions – some silly, some accidentally profound, some going beyond their knowledge but they did their best to accommodate them all. Funnily, there was not a piece of history facts or figures from those trips lingering in my mind but there remained the image of stone statues of horses, elephants, and mandarins I was awed by when seeing them for the first time. I also remembered the picnic lunch on a wide nylon sheet spread on the grass by the lakes or under the pine trees. For such a trip, my mother would pack me some bánh chưng or stuffed bánh mì, fruit and boiled water. I curiously glanced at my classmates’ picnic bags and there was not much difference in what their mother prepared for them.

To reach some of the imperial tombs, sometimes we had to travel by dragon boats all the way from the city’s center. We, kids, enjoyed the boat trips a great deal but I don’t think our teachers appreciated them that much. Anxiety might dominate their mind from the moment the kids, curious and naughty, stepped on the boat until the minute they landed and ran back to their parent’s waiting arms. It was until then our teachers could sigh with relief. By telling this, I’d like thank my teachers from Kim Long Primary School for being one of the first people who introduced me to the history and culture of Huế.

And this morning, when I was swimming in Hương River with Auntie Tuyết as the large and red sun was crawling over the top of the buildings down the stream, somewhere in the Southern bank of Hương River, I told her about my beloved history teacher, Hồ Tấn Phan. He adored Hương River and in his later life he saved every beat of his heart for her. He studied her through the artifacts found in Hương river: from the intact rice bowls, the chipped saucers to the broken pieces of something I can hardly tell what they are. Day in day out, he spent time with the pottery trying to find out the mysteries of Hương River and the stories about this land that she has kept for over thousands of years.

I sounded like a keen learner but was not a dedicated one. I want to know about Huế, my home and paradise, but I only studied it in my leisure time and at my convenience without noticing that the clock was ticking and my teacher’s time was running short. I was struck by shock and misery when one of his daughters told me his final day was coming close one day in early February 2016. I thought he was just sick for a while and he would be fine again like many other times before. To me and numerous other history enthusiasts, he was like a walking dictionary on history and culture of Huế. Whenever I got stuck, I would visit him at home or call him on the phone and he was always there answering all of my questions. Not anymore. He was gone, bringing with him all of the wisdom and knowledge he accumulated all his life. He was trying to pass it down to me but I was busy with something else which, I thought, was more exciting and more trendy. When I witnessed him taking his last breath, I felt totally empty. I just lost a great friend and teacher. Then I felt sorry for myself for losing the chance to learn from such an amazing teacher for good but feeling sorry won’t help, I bitterly realized. After more than a year of mourning him and grieving my loss, I picked myself up and finally started to do something unconventionally: resigning from my 10-year job in PR industry and learning to become a storyteller. It’s not because of him or anyone, it’s all for me. This is what I want to do.