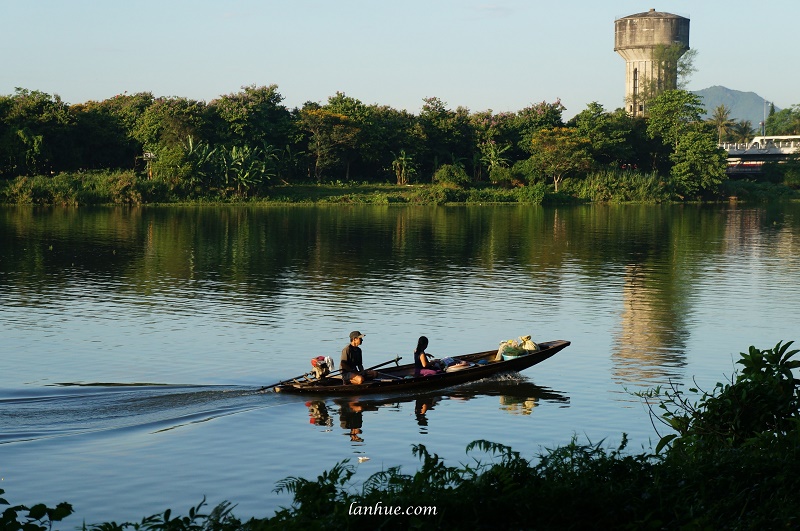 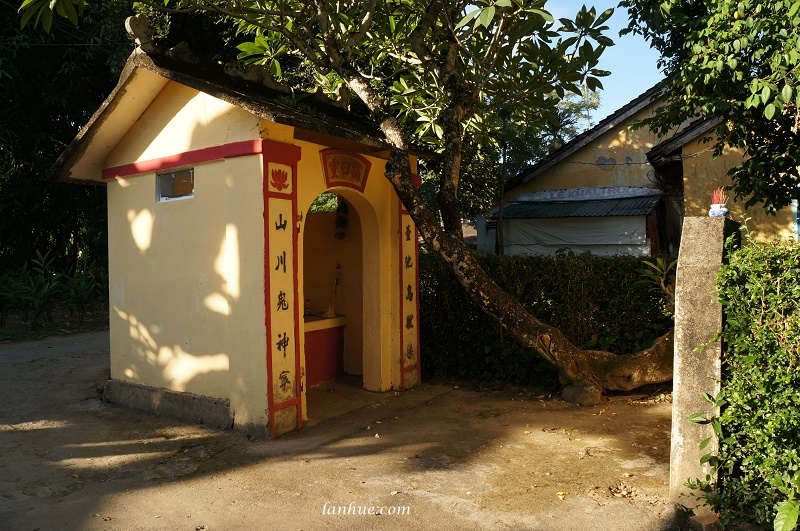 台池鸟兽乐,
山川鬼神宁.
Đài trì điểu thú lạc.
Sơn xuyên quỉ thần minh.
The birds and beasts in the pond and on the esplanade rejoice.
The ghosts and Gods of the mountains and rivers are at peace.

It’s said that Emperor Tự Đức was known as an emperor and poet who chose a peaceful lifestyle. During his reign (1848-1883), he turned Dã Viên Islet on Hương River into a royal garden and its relics such as an old temple and a stone stele with the islet’s original name (Dữ Dã Viên) on it still remain to date.

The old temple with a frangipani tree leaning on it was located right in the heart of the islet. When I saw the pair of the traditional Chinese lines on the temple, I had no idea what it said but luckily my good friend Yi Meng read and translated them for me. Those words impressed me that Dã Viên used to be a serene and beautiful haven but they also gave me a chill when I thought of how the birds, ghosts and Gods of Dã Viên would feel if one day this islet would be filled with concrete buildings and facilities.

I walked gently under tall trees through the woods on the Eastern side of Dã Viên Islet, my heart and mind became calmer. I couldn’t imagine there was such a lush vegetation right in the heart of the city. There were plants that I knew but there were also many others I had no idea what their names were and what they were used for. I heard birds singing near and far but I only saw one large black bird perching high on the tree. It did not seem scared even a bit. It just looked at ease although the day before I saw some men trying to trap the birds around the water treatment plant nearby.

When I reached the Eastern tip of the islet where there was erected a temple of Đạo Mẫu (a local religion worshipping Vietnamese Mother Goddesses) to find a nice cityscape from there. It was so breezy and airy that I realized how my house and many others felt oddly stuffy and hot now when we were in the midst of the sunny season. I beamed at the men who were preparing the bait using steamed yam for their fishing and teased them: “Oh, I didn’t know fishes in Hương River are vegetarians!” And we all laughed.

While the Eastern side of Dã Viên has no resident, there are about a dozen of families living on the Western side. Wandering their only lane, I felt as if I was back to my mother’s village in Dương Hòa where lanes are arched with bamboo trees or lined with plant fences. All of the houses there face South and have a garden. And I noticed that there were more dogs on this islet than I thought. The dogs were noisy but they didn’t really try to attack me, they just wanted me to know I was on their land.

When I roamed further down to the West, the small cement road stopped and the earth road, which felt soft and dusty underneath my feet, started from there. When I thought I was surrounded with nothing but nature, the religious singing echoed more loudly to where I was. I walked toward the direction of the sound found a simple temple.This was the other Đạo Mẫu Temple on the islet. A large dragon boat was anchored nearby. I looked inside the boat and saw the Đạo Mẫu followers doing their ritual process. Since they did not allow me to take pictures of them, I left and walked to the Western tip of the islet. From there, the view of Hương River and the two sides at sunset literally took my breath away. My face lit up when I thought I had found another spot to enjoy sunset in Huế but then when I remembered that a resort was planned on the very place where I was standing, I felt hopeless.

“Why do they only wish to save this beauty for some privileged people? Why do we, Huế citizens and lovers, allow them to do so?” Those questions echoed in my head.

I then realized there was nothing I could do to stop it. Really.

If so, why not enjoying it when I still had a chance to do that? Why couldn’t I be as carefree as the two men, the little girl and their dogs wading in the water over there? They cared nothing else but that moment. They seemed happy.