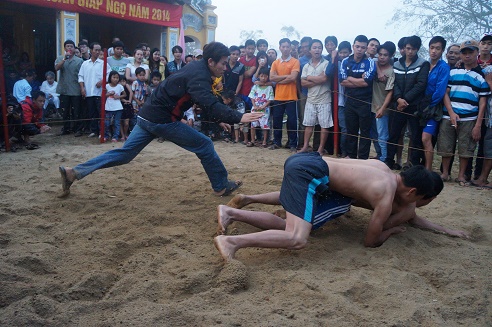 Sình Village’s Wrestling Festival (in Thừa Thiên Huế Province, Việt Nam) takes place in this village every 10th day of Tết – Vietnamese Lunar New Year. The wrestling festival used to be organized in the front yard of Sình Village’s temple but  since the last few years the official wrestling ring has been relocated at a public area near the entrance to Sình (aka Lại Ân) Village. The festival now includes two parts: ritual process at their temple together with some wrestling games in the front yard in the early morning as you can see in the video clip below; and festive wrestling at a public area which is not very far away from the temple. I hadn’t attended this locally well-known event until last Sunday, that was why I felt so excited. I preferred the wrestling atmosphere at the village’s temple to the festive wrestling as I love the setting of the games at that old temple by the intersection of Hương River and Bồ River; it gave me such a nostalgia.