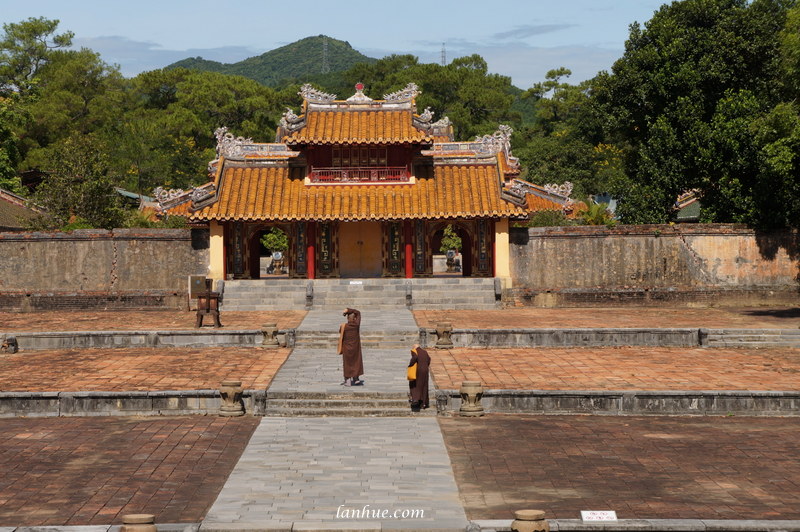 Our ancestors believe that our present life is just temporary and life after death is eternal. So did the emperors of Nguyễn Dynasty. Therefore, plans for a lăng – their eternal home was made long before they left this world.

Locations of imperial tombs in Huế were selected according to the rules of feng shui. Imperial tombs usually have a mountain or hill in front of it. This natural element is served as a feng shui screen which helps to protect bad things from going through the tomb area. The tombs should also face a calm river, a lake or a pond which is believed to accumulate good energy from the universe for the tomb.

The sun symbolizes the king – the son of Heaven so his eternal home was built to the West of Huế Citadel where the sun sets.

Here are the 7 imperial tomb complexes of Nguyễn Dynasty:

Thiên Thọ Lăng (1814-1820)
Thiên Thọ is a royal cemetery planned by the first king of Nguyễn Dynasty, Emperor Gia Long. This is where you can find the twin stone graves of the king and his first wife, Empress Thừa Thiên. With the twin graves, Emperor Gia Long wished to be near his first wife even in another world after death. Just a few walks away from their graves to the right is Emperor Gia Long’s second wife’s tomb. The graves, temples, stele pavilions, etc. are placed along a long lake which snakes through his royal cemetery. Instead of being enclosed by a wall like some other imperial tombs, Thiên Thọ is wide open to at the horizon where ranges of majestic mountains stand tall.

Hiếu Lăng (1840-1843)
The main architecture units at Emperor Minh Mạng’s tomb are placed on an axis. If you follow this axis to visit his grave which is located in a hill at the back of the tomb complex, you will find yourself going up and down continuously. From the Đại Hồng Môn (Great Red Door), the main door to the tomb complex, which was open only once for the king’s coffin to go through, cross the greeting courtyard guarded with two lines of stone statues of mandarins, elephants and horses. Then climb a staircase of the stele pavilion to reach a stone stele that his son, Emperor Thiệu Trị, erected to commemorate him. After that, descend the steps to cross another wide yard to meet an ornamentic 3-entrance wood door leading to the main temple where Emperor Minh Mạng and his Empress Tá Thiên Nhân are worshipped. After paying respect to them, you could go to the back door of this temple where you could see another decorative door made of brick which frames Minh Lâu (Enlightening Pavilion) which was placed on a hill top opposite. To reach Minh Lâu, descend the steps then cross one of the three bridges over Trừng Minh Lake and climb another staircase to find yourself standing in the open space of this poetic pavilion. From Minh Lâu, you could enjoy the scenic lakes and gardens around you and right there from the back door of this pavilion, there are steps connected to a bridge that leads to a round hill bordered with a brick wall on which there are a pair of bronze doors which are always locked. In that overgrown hill lies the remain of the second king of Nguyễn Dynasty. It’s said that his coffin was slided into the heart of the hill through an underground tunnel which has been sealed up since then.

Xương Lăng (1848)
Before passing away, Emperor Thiệu Trị asked his son, Emperor Tự Đức, to build him a simple tomb getting the models from the tombs of Emperor Minh Mạng. Emperor Tự Đức followed his father’s last words and built his grave in a hill which is similar to Emperor Minh Mạng’s. Like Emperor Gia Long’s tomb, this tomb complex has no walls around it. Although Emperor Thiệu Trị also emphasized that he wanted his tomb simple, Emperor Tự Đức made it grand and beautiful. The temple at Xương Lăng is actually a artistic piece of architecture and design. Apart from the meticulous and clever carving wood works, his poems were used to decorate the interior and exterior of the temple as well. It’s not over exaggerating to call his temple a poem and art gallery.

Khiêm Lăng (1864-1967)
Khiêm is the only complex in Huế which was built both as a residence and tomb. Emperor Tự Đức built it as his second palace (apart from the one inside the Huế Citadel) so he could come here for a rest from time to time. This complex was previously named Vạn Niên Cơ (Ten Thousand Year Residence) but after a riot in 1866, he renamed it Khiêm Cung (Modest Palace) and after 16 years later when he passed away, it was recalled Khiêm Lăng (Modest Tomb). This tomb was made by blood, toil, tears and sweat of so many workers and soldiers that there was a folk song lamenting:
“Ten Thousand Year, oh, Ten Thousand Year
Walls built with soldiers’ bones, canals dug with people’s blood”
This is also the only imperial tomb which has a theatre in it as the king is a great fan of Vietnamese royal opera. In this tomb complex, beside his grave, there are also the graves of his empress Lệ Thiên Anh and his adopted son, Emperor Kiến Phúc.

An Lăng (1899)
An Lăng was built for Emperor Dục Đức, Emperor Tự Đức’s adopted son, who was only on throne for 3 days before the head mandarins of Nguyễn Dynasty imprisoned him to death. His son Emperor Thành Thái and his grandson Emperor Duy Tân, who were exiled abroad by the French, were later buried beside him in this An Lăng. The graves of the empresses and concubines of these three kings are found in this imperial cemetery as well. Unlike many other imperial tombs of Nguyễn Dynasty, this tomb complex doesn’t have any statue of mandarins, elephants or horses. When his first wife, Empress Từ Minh, passed away about 20 years after his death, the royal court buried her next to him. Their graves are identical but we can tell the difference by looking at the dragon screen for him and the phoenix one for her. Strangely enough but at this final home of them, a formalized Chinese character of double-happiness is decorated on one of the feng shui screens of their twin graves.

Tư Lăng (1888-1923)
The tomb complex of Tư Lăng was previously built for Nguyễn Phúc Hồng Cai, Emperor Đồng Khánh’s father. When Emperor Đồng Khánh passed away at the age of 25, he hadn’t had time to plan a tomb for himself. The country was in a hard time at that time so the royal court decided to bury Emperor Đồng Khánh next to his father at Tư Lăng. The whole tomb complex was built under the reigns of the four kings: Đồng Khánh, Thành Thái, Duy Tân and Khải Định but with some interruption here and there. Not very far away from his grave to the right is the grave of his first wife, Empress Thánh Cung. Emperor Tự Đức’s tomb and Empress Mother Từ Cung’s are also near there.

Ứng Lăng (1920-1931)
Emperor Khải Định, the second last king of Nguyễn Dynasty, had his tomb built with a totally different architecture from his ancestors’. Built on the hill top of Châu Ê, Ứng Lăng has its temple and grave gathered under one roof of Khải Thành Palace. Most of the materials used for building this tomb were imported from France, Japan, China, etc. Although its scale is not as big as the other tombs, Ứng Lăng took 11 continuous years to complete. While the facade of Thiên Định Palace is decorated meticulously with bas-relief design, its interior wows the visitors with its exquisite mosaic walls and giant dragon paintings on the ceiling. On his grave, there places a sculpture of the emperor sitting on the throne which was casted in France in 1920. For me, Ứng Lăng is not only a tomb but also an East-Meets-West Art Museum of Old Huế.