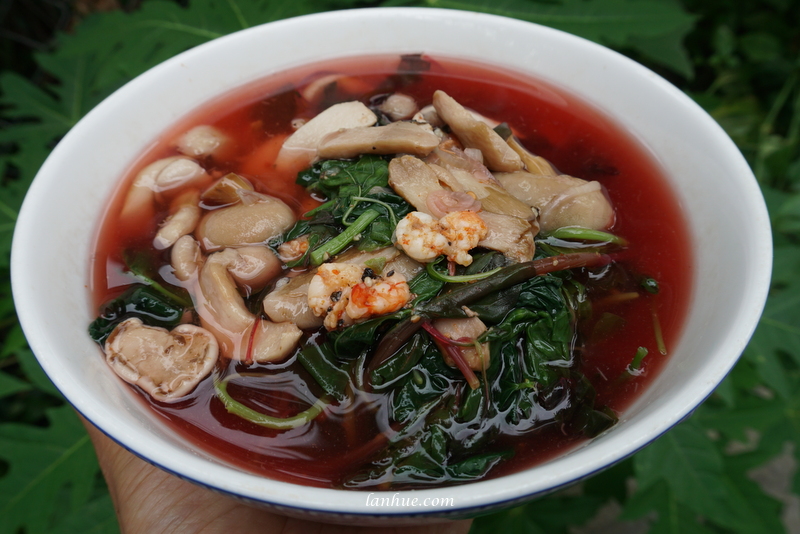 Nấm tràm (bitter bolete) might be favored by Huế people as much as truffle is to many French gourmets although it is way cheaper than the truffle. Nấm tràm’s season is between summer and autumn and it only appears after a few days of heavy rain.

Nấm tràm is very bitter, especially its skin, which is attractive to some but scary to the others. There are quite some Huế people who can’t eat nấm tràm and will never taste it again after the first bite because of its bitterness. There are also people who overcome the fear after the first few tries, they later become addicted to it. I’m one of the latter.

To reduce its bitterness, you should peel or shave its cap and stem. It’s quite time-consuming to shave the nấm tràm so the sellers will normally do it for their buyers (of course with an extra fee). Once nấm tràm has been shaved, soak it in salt water for about half an hour. After that, put it in boiling water and continue to boil it for about 3 minutes and pour it out into cold water. Before you start to continue to cook it with other ingredients, drain it by slightly squeeze between your palms.

Although you can cook nấm tràm in many ways such as stir-fry, soup or porridge, etc., my favorite is nấm tràm clear soup cooked with sweet potato leaves (or a mixture of different leaves or vegetables) and freshly caught shrimp from Hương River while my mother prefers nấm tràm porridge with shrimp and beef or pork. If you cook either soup or porridge, make sure you slightly stir-fry the nấm tràm with cooking oil, sliced onion, red chilli powder, black pepper, salt, fish sauce and shrimp or meat in advance. This will make the nấm tràm more tasty and firm.

Nấm tràm is not available all year round so if you’d like to save for the future use, you could dry it in the sun for a couple of days until it’s shriveled and dehydrated completely.