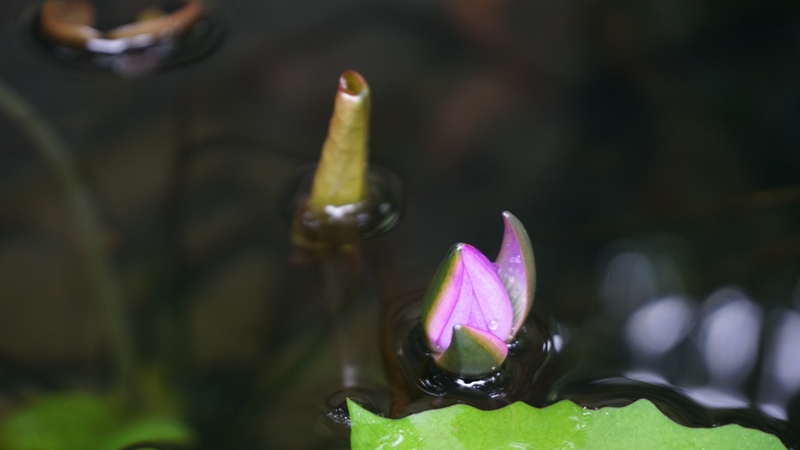 After a whole week of rain day in day out, this morning it stopped pouring. I jumped on my Blue Phoenix bike heading to Xuân Viên Tiểu Cung, the residence of Phạm Hữu Điển, a Minister of Rite under Nguyễn Dynasty. It’s just 5 minute bicycle ride from my home but this was the first time I visited it.

Just when I was on the way there, it started to rain again. I had my newly bought raincoat with me so I just kept going. The house is surrounded with a low plant fence so from outside you could see it nestling among the verdant garden. His residence is a complex of a main house and its annex. The main house faces a stand-alone pond and wind screen, which serve as feng shui elements according to Eastern philosophy. The thin iron gate was closed but it wasn’t locked. I slightly pushed it and it grindingly opened for me. The moment I was about to walk through the gate, an elderly lady’s voice echoed from the annex: “Who’s that?”

This residence is familiar among the local tour companies and each day there are some visitors wandering around its garden. By the time I stood looking around in the front yard, O Gái, the housekeeper, opened the door of the main house and welcomed me in Minister Điển’s once residence and now family shrine. Built in late nineteenth century, this residence is a piece of East-meets-West architecture whose tile roof is supported with carved wooden frames while its walls are made of concrete. In the middle compartment, at the end of the house standing the altar of Minister Điển where some of his mementos such as his belt and walking stick still remain. To my right is a new altar of his granddaughter, Ms. Túy who has passed away a few months ago. She died at the age of 91. My mentor, chị Vân, told me that Ms. Túy (which I would prefer to call Mệ Túy) was a small and smiley lady, and complained that now that she was gone the house lost its soul. I never know Mệ Túy but I imagine she was an amicable old lady when I looked at the pictures of hers hung on the walls in the annex where she used to live.

O Gái invited me to sit down on a wooden bench and serve me some hot drink made of fresh green tea leaves and ginger. I guessed, at this very table, Mệ Túy used to warmly receive a lot of tourists to her grandfather’s home and many good memories about the minister was shared with the curious and keen travelers. I sat sipping tea and was deep in thought. Outside thousands of rain dust sprinkling on the mangosteen leaves, the early-blooming golden apricot flowers, the slightly opened water-lily blossom and the mossy roof. I looked at the soaked and torn golden apricot flowers, which are the symbol of the spring of the Southern Việt Nam, and felt gloomy, but then my mood was lightened up when I pictured in my mind a morning in spring more than a hundred years ago when the owner came up with the name “Xuân Viên Tiểu Cung” (A Small Residence in the Spring Garden) for his home. It must have been a lovely morning with the air filled with the fragrance from blooming flowers in the garden and the gentle warmth from shining sun. And I thought about my dream. A dream of owning a small house in a quiet and lush garden where I would plant fruit trees such as mango, guava, jackfruit, papaya, mangosteen, persimmon, and a lot of flower shrubs as well. When I shared this thought with chị Vân, she suggested that I bought a tiny piece of land next to Minister Điển’s house, that way I could enjoy his beautiful garden every day. Hah, that isn’t a bad idea at all!